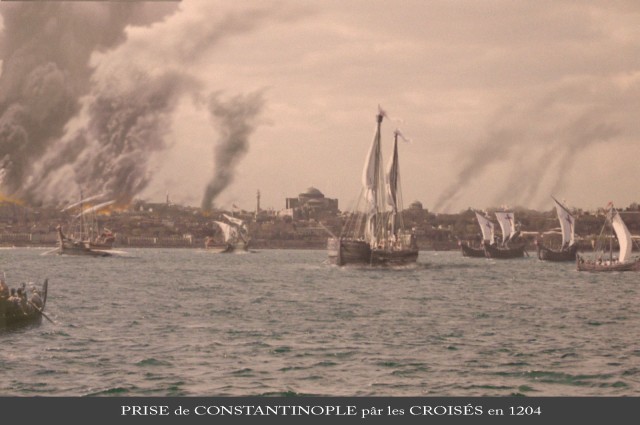 The report of the impious acts perpetrated in the Great Church [= Ἁγία Σοφία] are unwelcome to the ears. The table of sacrifice, fashioned from every kind of precious material and fused by fire into one whole-blended together into a perfection of one multicolored thing of beauty, truly extraordinary and admired by all nations-was broken into pieces and divided among the despoilers, as was the lot of all the sacred church treasures, countless in number and unsurpassed in beauty. They found it fitting to bring out as so much booty the all-hallowed vessels and furnishings which had been wrought with incomparable elegance and craftsmanship from rare materials. In addition, in order to remove the pure silver which overlay the railing of the bema, the wondrous pulpit and the gates, as well as that which covered a great many other adornments, all of which were plated with gold, they led to the very sanctuary of the temple itself mules and asses with packsaddles; some of these, unable to keep their feet on the smoothly polished marble floors, slipped and were pierced by knives so that the excrement from the bowels and the spilled blood defiled the sacred floor. Moreover, a certain silly woman laden with sins, an attendant of the Erinyes, the handmaid of demons, the workshop of unspeakable spells and reprehensible charms, waxing wanton against Christ,’…sat upon the synthronon’.and intoned a song, and then whirled about and kicked up her heels in dance.

Such then, to make a long story short, were the outrageous crimes committed by the Western armies against the inheritance of Christ. Without showing any feelings of humanity whatsoever, they exacted from all their money and chattel, dwellings and clothing, leaving to them nothing of all their goods. Thus behaved the brazen neck, the haughty spirit, the high brow, the ever-shaved and youthful cheek, the bloodthirsty right hand, the wrathful nostril, the disdainful eye, the insatiable jaw, the hateful heart, the piercing and running speech practically dancing over the lips. More to blame were the learned and wise among men, they who were faithful to their oaths, who loved the truth and hated evil, who were both more pious and just and scrupulous in keeping the commandments of Christ than we «Greeks.» Even more culpable were those who had raised the cross to their shoulders, who had time and again sworn by it and the sayings of the Lord to cross over Christian lands without bloodletting, neither turning aside to the right nor inclining to the left, and to take up arms against the Saracens and to stain red their swords in their blood

[…] The sons of Ismael did not behave in this way, for when the Latins overpowered Sion the Latins showed no compassion or kindness to their race. Neither did the Ismaelites neigh after Latin women, nor did they turn the cenotaph of Christ into a common burial place of the fallen, nor did they transform the entranceway of the life-bringing tomb into a passageway leading down into Hades, nor did they replace the Resurrection with the Fall. Rather, they allowed everyone to depart in exchange for the payment of a few gold coins; they took only the ransom money and left to the people all their possessions, even though these numbered more than the grains of sand. Thus the enemies of Christ dealt magnanimously with the Latin infidels, inflicting upon them neither sword, nor fire, nor hunger, nor persecution, nor nakedness, nor bruises, nor constraints. How differently, as we have briefly recounted, the Latins treated us who love Christ and are their fellow believers, guiltless of any wrong against them.

O City, City, eye of all cities, universal boast, supramundane wonder, wet nurse of churches, leader of the faith, guide of Orthodoxy, beloved topic of orations, the abode of every good thing! 0 City, that hast drunk at the hand of the Lord the cup of his fury! 0 City, consumed by a fire far more drastic than the fire which of old fell upon the Pentapolis!» [Ὦ πόλις, πόλεων πασῶν ὀφθαλμέ, ἄκουσμα παγκόσμιον, θέαμα ὑπερκόσμιον, ἐκκλησιῶν γαλουχέ, πίστεως ἀρχηγέ, ὀρθοδοξίας ποδηγέ, λόγων μέλημα, καλοῦ παντὸς ἐνδιαίτημα]

Thus it was that Constantine’s fair city, the common delight and boast of all nations, was laid waste by fire and blackened by soot, taken and emptied of all wealth, public and private, as well as that which was consecrated to God by the scattered nations of the West. Feeble and  unspeakable, these assembled to undertake a voyage of piracy, and their pretext to backwater against us…

As we left the City behind, others returned, thanks to God, and loudly bewailed their misfortunes, but I threw myself, just as I was, on the ground and reproached the walls both because they alone were insensible, neither shedding tears nor lying in ruins upon the earth, and because they still stood upright. «If those things for whose protection you were erected no longer exist, being utterly destroyed by fire and war, for what purpose do you still stand? And what will you protect hereafter unless you strive to bring destruction to the enemy in the day of wrath, when the Lord shall rise up to strike terribly those who have dealt with us in such fashion, riding perhaps on the West, according to David’s prophecy?

«0 imperial City,» I cried out, City fortified, City of the great king,  tabernacle of the most High, praise and song of his servants and beloved refuge for strangers, queen of the queens of cities, song of songs and splendor of splendors, and the rarest vision of the rare wonders of the world,

who is it that has torn us away from thee like darling children from their adoring mother? What shall become of us? Whither shall we go? What consolation shall we find in our nakedness, torn from thy bosom as from a mother’s womb? When shall we look upon thee, not as thou now art, a plain of desolation  and a valley of weeping,’° trampled by armies and despised and rejected, but exalted and restored, revered by those who humbled thee and provoked thee, and once again sucking the milk of the Gentiles and eating the wealth of kings? When shall we doff these shriveled and tattered rags which, like fig leaves and garments of skins, suffice not to cover the whole body and which the foreigners, as treacherous as the serpent, forced upon us with attendant evils and injuries? Do thou propitiate God, 0 holiest of cities! Bring forward, on thy behalf, the temples, the martyrs’ relics, these debacles, the magnitude of the trials and tribulations suffered by thee in full measure, consigned to the flames by impious men. For he says, «Call upon me in the day of thine afflictions and I will deliver thee and thou shalt glorify me.» Shall I ever more look upon thee,’ 0 holiest and greatest of all temples, 0 terrestrial heaven, 0 throne of God’s glory,  0 thou chariot of the cherubim,»» 0 thou second firmament proclaiming the work of God’s hands,  a work singular and wondrous and a gladness resounding through the whole earth? And who shall answer but he alone who, having been made trial of in his own Passion, knows how to succor those who are sorely tried, he who delivers the poor man from the hands of his oppressors and the poor man and the needy from his despoilers,»» and as the creator of all things ever changes them for the better?

Poetry from this to that - original copyright remain with the owner, translations © Björn Thegeby

I came, I saw, I photographed…

Ancient Stories from the Ancient Past